The real history of Russia started somewhere in the 9th century when a Scandinavian warrior Rurik became a ruler of Novgorod – one of its cities. Nobody knows for sure, whether he was invited there or took the city by force. Nevertheless, during the centuries a country was gaining power by the rule of his successors.

The country consists of 85 regions and 21 republics of them are partially autonomous. The state shares marine and land borders with 16 countries and is washed by the 12 seas. The area of about 17 million km2 (that is the one-eighth part of the planet) makes Russia the biggest country. Though, only approximately 144 million people live here and this fact describes a low density of the population. Russia is a multinational country – about 160 ethnic groups live on its territory and speak 100 different languages. However, there exists the only official language – Russian. 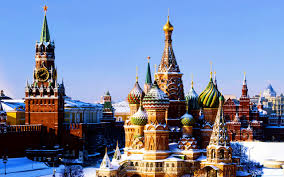 Due to the great latitude, Russia is compiled of the 9 different time zones and of landscape variety. Its geographical look consists of a great amount of plains, steppes, tundra, and mountains (the Urals divide the state into European and Asian parts; the Caucasus). Russia has thousands of rivers (the Volga is the longest European one; 3700 km) and lakes, one of which – Baikal (Siberia) – may boast of the one-fifth of the planet’s fresh water. Siberia may be called the “world’s lunges” as it contains more than 25% of the forests.

The climate is predominantly humid continental, but Russia’s northern part is characterized by a subarctic climate with cold winters and much snow and short summers. The coastal area near the Black Sea possesses a pleasant humid subtropical climate. The temperature rates over the year vary greatly.

Moscow (the capital megapolis and very expensive city), Saint Petersburg (was functioning as a capital from 1712 toll 1918), and Novosibirsk are the tree largest cities in Russia. The Moscow’s Russian State Library is the biggest in Europe. A lot of the Earth’s richest people live in Moscow and they are 74 in number.

The longest railway in the world (9200 km) called the Trans-Siberian is also located there.