A state located on the British Isles and composed of about 5,000 islands is called the United Kingdom. Its territory is 244.1 thousand km2. The mainland and the Isles are separated by La Manche.

A name “the United Kingdom” refers to a country consisting of Scotland, Wales, England and a part of Ireland called Northern Ireland. The capital metropolis is London. It is also one the 7th biggest city in the world while its population numbers more than 9 million. The other part of Ireland is occupied by the Irish Republic with a main city in Dublin.

In general, the territory of the state may be divided into Lowland (England) and Highland (Scotland and Wales) parts due to its various landscapes. Ben Nevis and Snowdon are the highest mountain peaks in the UK. Once it was a country with lush greenery. Though, today woods occupy about 8% of its area. 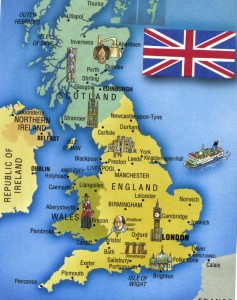 Britain is rich in water arteries inside the country. The Severn and the Themes are the two main rivers. The latter is even navigable for ships. There are also many lakes (or in the Scottish style “lochs”) located mainly in England and in the Highlands of Scotland. The deepest is Wastwater. The UK is also known for its navigable canals.

The weather conditions in Britain are famous by not so severe winter, moderately hot summer and much of precipitations. The temperate insular climate is due to warm waters of the Gulf Stream. The coastline has a lot of indentations and because of this the whole country is influenced by the ocean. People usually do not notice any radical differences between, for example, a summer and a fall. As a rule, the temperature on the islands is not higher than 32 °C or lower than -10 °C.  The period from March to June is the driest, while October is the wettest month. Statistics says that it doesn’t rain on the Isles only 160 days per year.

Due to the awful fogs and smogs, the state is known as the “Foggy Albion”. These phenomena are neither pleasant nor safe as far as a lot of car accidents happen owing to them. Nevertheless, the British like to discuss the weather topic and even know great number of jokes, for example, “Do you know that Scottish word for describing when it’s cold and rainy? – Summer.” Or “Have you heard about the man who couldn’t tell about the character of the weather because it was foggy?”