St. Paul’s Cathedral is a tremendous church situated in London (on the highest hill of the City). In fact, it is already the sixth temple standing on that place. There also existed a Roman Diana’s temple, the 1st Christian cathedral (604; was burnt), its replacement (685; was destroyed by the Scandinavian people), the third cathedral (1087; was burnt), Old St. Paul’s (late 11th century; was destroyed by the Great London’s Fire).

For three hundred years, a present-day cathedral has been presiding over the London’s skyline. It is 365 feet high (for the number of days in a year) that makes it the 2nd largest dome after St. Peter’s Basilica in Rome. It is considered to be a very beautiful and recognizable landmark of Great Britain’s capital. It was designed by an architect Sir Christopher Wren, being a great mixture of Neoclassic, Gothic and Baroque features. Portland stone was chosen to be its main material. Moreover, the architect was living nearby to observe the process of cathedral construction. All the building works were completed on the 76th birthday of its creator (October 20, 1708). 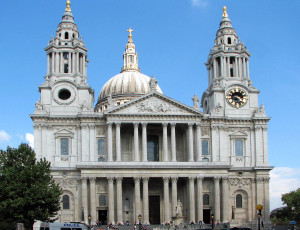 The main entrance to the building is the West Porch. It is the first place where in 1981 Charles and Diana at the first time appeared as a married couple. In the cathedral itself a lot of significant event were held, for example, Margaret Thatcher’s funeral and Queen Victoria’s jubilee celebrations.

There are 300 monuments, statues and plaques within the building. Many notable people (artists, poets, soldiers) were buried in the crypt, including Wren himself. The tombs of British military heroes – the Duke of Wellington and Admiral Nelson – are situated hear as well as Florence Nightingale’s, John Donne’s, Alexander Fleming’s and Roger Walden’s tombs. You may also find there lists of servicemen died during the WWII.

There are three circular galleries here: the Whispering, the Stone and The Golden Galleries. The first one is the inner and, perhaps, the most wonderful. It was called so because of the fact that any whisper may be heard in its opposite side.

Unfortunately, St. Paul’s Cathedral needs restorations from time to time as its massive weight (about 66,000 ton) causes cracks. This is of great importance as the cathedral is a daily working church. Sightseeing is possible every day, except Sundays when it is open for the worship only.